Kenya’s growing economy translates into an expanding middle class, thus, increasing demand for housing. According to the National Housing Corporation (NHC), the housing deficit stands at 2.0 mn and has been growing annually by approximately 200,000 units. As such the government introduced ‘provision of affordable housing’ in 2017 as one of its four key pillars for the following five years with the aim of delivering 500,000 units to alleviate the housing crisis. However, three years later, the government has only delivered approximately 228 housing units, an indicator that the target units might just be a pipe dream. The slow momentum is largely attributable to unavailability of financing for both developers and buyers alike. In our previous topicals, we have looked into government strides aimed at resolving the deficit: the establishment of Kenya Mortgage Refinancing Company, Home Ownership Savings Plan and the National Housing Development Fund, among others. Despite the progress made, unavailability of funding continues to be a key impediment to the fruition of the government’s Big Four Agenda on the provision of affordable housing. Therefore, this week, we focus on ways of accelerating funding for affordable housing where we shall cover:

Kenya’s economy has grown tremendously over the past decade evidenced by the relatively high GDP per Capita of Kshs 198,078 as at 2019, with a ten-year CAGR of 10.1%, according to Kenya National Bureau of Statistics, resulting in the World Bank’s declaration of Kenya as a middle- income country in 2014. The growing economy translates into an expanding middle class, thus, increasing demand for goods and services, including decent housing. According to the Kenya National Bureau of Statistics, the Kenyan middle class can be defined as anyone having a disposable income of between Kshs. 23,670 and Kshs. 199,999 per month. However, 74.5% of the working population earns a median gross income of Kshs 50,000 per month or below.

With the increase in economic growth, demand for appropriate housing comes to the forefront. However, in most areas countrywide and for the majority of urban dwellers, access to decent affordable housing has been and remains a pipe dream. Despite the acknowledged importance of housing in Kenya, the demand still outstrips supply. This manifests itself through the increased informal settlements in urban areas with World Bank estimating that 56.0% of the Kenyan urban population live in slums and poor quality housing in rural areas. Delivery of housing to the low to middle-income citizens is further aggravated by inequality and imbalance in housing supply among income groups. Currently, more than 80.0% of new houses produced are for high and upper-middle-income earners, driven by the ease of exit by developers as well as high construction costs, ultimately leaving the low-end and lower mid-end income brackets, who make up approximately 75.4% of the population not catered for.

To alleviate the housing issue, the government has made tremendous progress by implementing various policies and fiscal reforms for the past three decades with the aim of enhancing house ownership. So far, the incentives and tax exemptions aimed at driving homeownership in Kenya include:

Despite the above incentives, Kenya has failed to develop a robust housing finance system leading to relatively low homeownership rates. According to the 2015/16 Kenya Integrated Household Budget Survey (KIHBS), only 26.1% of Kenyans living in urban areas own the homes they live in. This is in comparison to countries like South Africa and the United States with 53.5% and 64.5%, respectively. Those who own homes rely mainly on savings and other sources of financing including commercial bank loans, and local investment groups commonly referred to as chamas, and Savings & Credit Co-operative Societies (SACCOs). Mortgage loans uptake remains relatively low totaling to 26,554 as at December 2018 out of an adult population of 23.0 mn. On the supply end, the Kenya residential market has continued to witness increased activities within the high-end markets fueled by the relatively good returns as investors can charge a premium on units within these submarkets. However, the highest demand for housing remains within the low and mid-end markets, which have suffered low supply as developers are not keen on such submarkets, given the relatively low property market prices and resultant low returns.

The main challenges facing housing include;

Singapore is a country with one of the best housing solutions in the world. In 1960, just after acquiring independence, Singapore had a cumulative housing requirement of 147,000 units for the 10-year period that ended in 1969 for a population of 1.6 mn people, which was growing at 6.4% per annum. The private sector could only provide approximately 2,500 housing units per year and at price levels out of reach for the low-income segment.  The government, therefore, put in place policies and strategies to promote home-ownership for its residents. According to the World Bank, as at 2018, 80.0% of Singaporeans lived in houses built by the government, through the Housing Development Board (HDB) (the equivalent of the National Housing Corporation in Kenya), with 90.0% being owner-occupied, yet when they attained self-government in 1959 only 9.0% lived in public housing.

Some of the initiatives that have led to the fruition and sustenance of affordable housing in Singapore are: 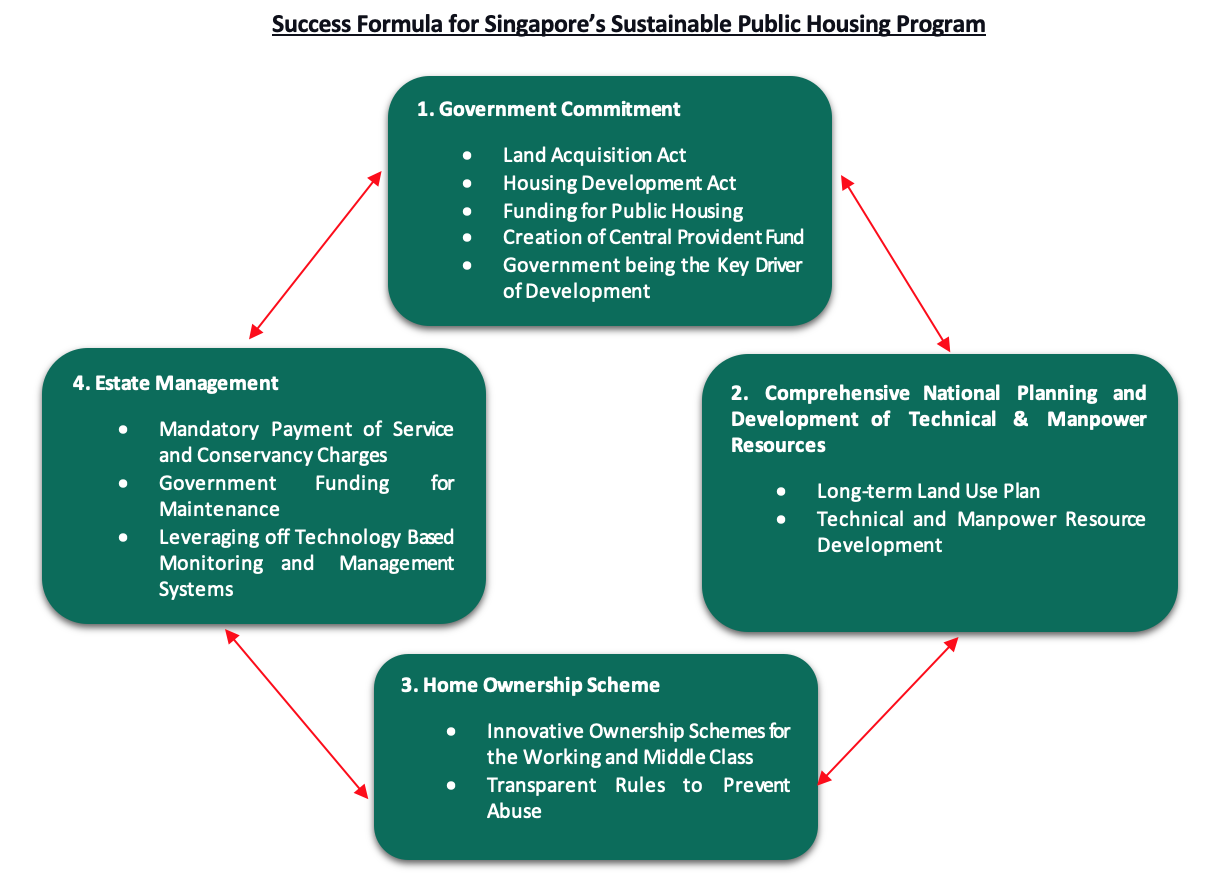 NOTE: Central Provident Fund (CPF):- is a compulsory comprehensive savings and pension plan for working Singaporeans and permanent residents primarily to fund their retirement, healthcare, and housing needs in Singapore.

The public housing program in Singapore has been enabled predominantly by the availability of funds from the general government tax revenue and the Central Provident Fund (CPF). Similar to the National Housing Development Fund in Kenya, Singapore has in place the Central Provident Fund which was initially installed as a vehicle for housing finance. A major policy innovation was later implemented to allow withdrawals from the fund to finance the purchase of houses sold by the Housing Development Board. When the CPF was established in 1955, both employers and employees contributed 10.0% (5.0% each by employees and employers) of the individual employee’s monthly salary toward the employee’s personal and portable account in the fund. The contribution rates in 2016 were 20.0% of wages for employees (the portion of pay withheld by an employer to go into the CPF account) and 17.0% of wages for employers (an amount an employer is required to pay into an employees’ CPF account out of their own pocket, above and beyond the stipulated salary), up to a monthly salary ceiling of an equivalent of Kshs 44,000.

The Housing Development Board (HDB) receives government loans to finance its mortgage lending and pays interest at the prevailing CPF savings rate. The HDB uses the loans to provide mortgage loans and mortgage insurance to buyers of its leasehold flats (both new and resale). The typical loan represents 80.0% of the price of the flat. The maximum repayment period is limited to 25 years. In Singapore, every household can apply for a maximum of two HDB loans. The mortgage interest rate charged by the HDB is pegged at 0.1% points above the CPF ordinary account savings interest rate. The latter is based on savings rates offered by the commercial banks, subject to a minimum of 2.5%. The use of CPF savings for the purchase of public housing has been an important factor in making the homeownership program in Singapore possible and successful.

Initially, HDB introduced the homeownership scheme which aimed at providing public housing for people whose housing needs were not met by the private sector. The scheme then grew slowly because of the small number of flats available and the requirement of a handsome amount of down payment. To improve the situation, a CPF Act was introduced to allow members to withdraw up to 80.0% of their total CPF savings to purchase a flat. The Act also stipulated that the employers and employees had to contribute a monthly sum to the employees’ CPF accounts. As the returns on CPF savings are low comparing to the price increase in public ownership flats, most residents chose to withdraw their CPF savings to purchase public flats to maximize the returns of their savings. This mandatory savings deposited with the government had built up a huge capital reserve for the government to finance housing developments and simultaneously enabled all CPF members to purchase their houses and meet their initial and mortgage payments. Therefore, utilization of savings can enhance homeownership by either fully settling the unit sale value or the deposit.

These are the financing options for each type of housing as provided by the Housing Development Board:

In conclusion, key take-outs and lessons Kenya could take up from the Singapore housing system would be;

Accessing funding for real estate continues to be a key challenge in Kenya, and especially with the need to fuel the government’s initiative on the provision of affordable housing with the target of developing approximately 500,000 housing units by 2020. Borrowing lessons from the case study in Singapore, the private sector is also a key player in resolving the housing deficit. Majorly, the private sector’s participation in the development of affordable housing in Kenya has been crippled by the unavailability of financing in the wake of tough economic times, bank dominance where approximately 95.0% of financing is from banks and only 5.0% is obtained from other sources according to World Bank and the relatively high cost of funding in Kenya. Learning from developed countries such as Singapore and the United Kingdom, capital markets play a key role in the mobilization of commercial financing mainly to boost housing. Therefore, while seeking to accelerate funding for affordable housing development, there is a need for consideration of ways of deepening capital markets and access to non-bank funding. Some of the ways of achieving this include:

In conclusion, the supply of affordable housing units has mainly been constrained by the unavailability of financing, especially with the current bank dominance. There is, therefore, the need to mobilize alternative sources of funding, particularly the opening up of capital markets’ access to developers, which will provide a low-cost capital raising mechanism, thus, fill in the existing financing gap in addition to complementing the government efforts aimed at driving one of the government’s Big Four Agenda on the provision of affordable housing.

Disclaimer: The views expressed in this publication are those of the writers where particulars are not warranted. This publication is meant for general information only and is not a warranty, representation, advice or solicitation of any nature. Readers are advised in all circumstances to seek the advice of a registered investment advisor.