In 2022, the Kenyan shilling has continued with the depreciation trend experienced in 2021 and 2020, with the Kenyan shilling depreciating by 2.6% against the US Dollar (USD) to Kshs 116.1 as of 13th May 2022, from Kshs 113.1 recorded on 3rd January 2022. Key to note, this the lowest the Kenyan shilling has ever traded against the USD. The poor performance of the shilling is mainly attributable to the increased dollar demand by energy and general importers, with Kenya largely being a net importer. Global oil prices have also increased during the year, attributable to the persisting supply chain constraints following the COVID-19 pandemic, worsened by the current global geopolitical tensions following the Russia-Ukraine conflict, coupled with the reopening of economies globally, which has seen demand outpace fuel supply, further inflating the country’s import bill and consequently weakening the shilling. Additionally, Kenya has seen affirmation of its Long-Term Foreign-Currency Issuer Default Rating (IDR) at 'B+' with a Negative Outlook by Fitch Ratings, unchanged from the last review in 2021 as a result of the currency depreciation, increasing inflation and the risks arising from the upcoming August 2022 general elections. As a result, this week we shall be focusing in detail the factors that are expected to drive the performance of the Kenya shilling and thereafter give our outlook for 2022.

We have previously released Currency outlook in 2020 and 2021 as summarized below;

With the shilling having depreciated by 2.6% on a YTD basis, we saw the need to revisit the topic on currency outlook, in order to shed some light on how the shilling is expected to behave in 2022. In this topical, we shall be focusing in detail the factors that are expected to drive the performance of the Kenya shilling and thereafter give our outlook for 2022 based on these factors. We shall cover the following:

Section I: Historical Performance of the Kenyan Shilling

In the period 2017-2019, the Kenyan shilling remained relatively stable against the USD trading within the range of Kshs 99.4 – Kshs 104.2. However, the economic shocks occasioned by the COVID-19 pandemic in 2020 caused volatility of the shilling leading to a depreciation of 7.7% in 2020 and a further 3.6% in 2021. On a YTD basis, the shilling has depreciated by 2.6% against the USD, to close at Kshs 116.1, from Kshs 113.1 recorded on 3rd January 2022. The depreciation in 2022 is attributable to the rising global crude oil prices on the back of supply constraints and geopolitical pressures at a time when demand is picking up with the easing of COVID-19 restrictions and as economies reopen. The chart below illustrates the performance of the Kshs against the USD over the last 5 years; 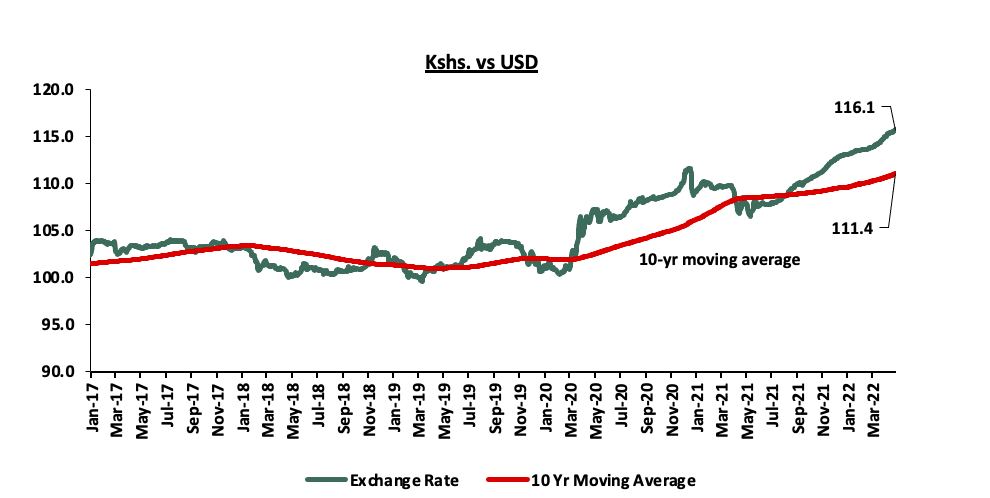 Below are some of the factors that have been supporting the shilling:

ii. Strong diaspora remittances, which have grown by a 10-year CAGR of 13.1% to USD 363.6 mn, in March 2022 from USD 106.2 mn recorded in March 2012 attributable to the increasing Kenyan population in the diaspora and advancing technology that makes transfer of money easier. Key to note, these are the highest diaspora remittances, ever recorded. The chart below shows the trend of the evolution of the Diaspora Remittances:

Despite these factors, the shilling has been put under pressure mainly by increasing global oil prices leading to a high dollar demand from energy and oil suppliers, which outweighs supply, and a growing import bill, that has grown by a 10-year CAGR of 7.2% to Kshs 2.6 tn in December 2021, from Kshs 1.3 tn in December 2011.

Kenya remains to be a net importer of crude oil, which accounted for the second largest share of imports, at 17.8% of total imports as of December 2021. The increasing global oil prices have increased the demand for dollars from oil and energy importers who have to increase the amounts they pay for oil imports and hence depleting dollar supply in the market. As a result, this has continued to exert downward pressure on the shilling. On a YTD basis, the Murban Oil that Kenya imports has increased by 34.5% to USD 105.5 per barrel, from USD 78.4 per barrel recorded on 3rd January 2022, mainly attributable to existing supply chain bottle necks, that were worsened by the Russia-Ukraine conflict that has seen demand of oil outweigh supply. Prices of crude oil are expected to remain relatively high in the near term and as such will continue to exert downward pressure on the shilling.

II. Shortage of the USD following continued reopening of economies

Following the peak of COVID-19 pandemic in 2020, most global economies went on a slowdown due to restrictions and lockdowns that curbed economic growth. However, in 2021, following the discovery of vaccines, vaccine accessibility and vaccine inoculation, most economies have continued to rebuild hence increasing the global demand for the USD for global trade. Further, interest rate hikes by the United States’ Federal Reserve during the Q1’2022 to curb inflation has seen redirection of dollar flows to the United States and away from emerging and developing markets.

According to the 2022 Economic Survey released by the Kenya National Bureau of Statistics (KNBS), Kenya’s current account deficit expanded by 30.1% in FY’2021, to Kshs 663.8 bn, from Kshs 510.1 bn recorded in FY’2020. This was attributed to a robust increase in merchandise imports by 30.9% to Kshs 2.6 tn in FY’2021, from Kshs 1.6 bn in FY’2020 as compared to a 15.5% increase in merchandise exports to Kshs 743.7 bn, from Kshs 643.9 bn in FY’2020. Though the exports gradually increased in FY’2021 on account of increase in value of exports of horticulture, coffee and tea, which recorded increase of 21.8%, 17.5% and 0.4%, respectively, the more aggressive growth in imports is still worrying and continues to put pressure on the shilling. Moreover, the high fuel prices currently witnessed in the country are likely to increase the import bill. We believe that this high import bill will continue weighing on the improving current account balance and as such, we expect the shilling to continue destabilizing against other currencies.

Kenya’s Forex Reserves have remained adequate and above the CBK’s statutory requirement of at least 4.0 months of import cover, with the forex reserves as at 13th May 2021 at USD 8.4 bn (5 months import cover), an increase of 6.4%, from USD 7.9 bn (4.8 months import cover) in May 2021. The improvement in the forex reserves can be attributed to increased inflows from key sectors such as tourism, coupled with inflows of USD 750.0 mn World Bank received in March 2022 and the USD 244.0 mn expected to be received from the International Monetary Fund as part of the Extended Fund Facility (EFF) and Extended Credit Facility (EFF). However, the reserves have come under increasing pressure partly due to debt service obligations and release of dollars into the market to act as buffers against volatility of the shilling..

Going forward, the elevated debt levels witnessed in the country are likely to put forex reserves under pressure as a significant amount will be used to repay the debts. As a consequence, the Kenyan shilling will be exposed to foreign exchange volatility causing it to weaken. However, we expect the reserves to be supported by increasing diaspora remittance inflows, continued investor capital inflows and increasing exports following increased activities with the key trading partners.

The Central Bank Rate (CBR) was revised down to 7.00% from 8.25% in January 2020 to support the local economy. Despite this, the yields on government securities have remained high and attractive. Inflation rates have also remained relatively stable and within the government’s target of 2.5% - 7.5%. This is mainly attributable to the application of fuel subsidies under the Petroleum Development Fund that have shielded the fuel prices in Kenya against the full impact of rising global fuel prices. As such, we do not expect the CBK to increase the rates in the short term given the government’s commitment to sustain the fuel subsidy and protect citizenry against the rising cost of living.

From the above currency drivers, 1 is negative (Government Debt), while 3 are neutral (Balance of Payment, Monetary Policy, Forex reserves) indicating that currency remain uncertain with a bias towards further depreciation in the short term.

Based on the factors discussed above and factoring in the effects of the current geopolitical tensions arising from the Russia-Ukraine tensions, we expect the Kenyan shilling to remain within a range of Kshs 115.1 and Kshs 119.1 against the USD in the medium term based on the Purchasing Power Parity (PPP) and Interest Rate Parity (IRP) approach respectively, with a bias of a 4.7% depreciation on account of:

Disclaimer: The views expressed in this publication are those of the writers where particulars are not warranted. This publication, which is in compliance with Section 2 of the Capital Markets Authority Act Cap 485A, is meant for general information only and is not a warranty, representation, advice or solicitation of any nature. Readers are advised in all circumstances to seek the advice of a registered investment advisor.