Over the past few years, Kenya’s Public Debt has been on the rise as a result of the government’s ambitious development agenda evident in the country’s budgets over the last ten years.  We have seen a couple of rating agencies relook at the country’s Sovereign Credit Outlook and change them to a more negative outlook. Below is a summary of those:

Below are the previous topicals we have done on Kenya’s debt:

In this week’s topical, we focus on the current state of affairs regarding the country’s public debt profile and levels and discuss how sustainable the same is. Under this, we shall cover:

Section I: Kenya’s Evolution of Debt

The country’s total public debt as at March 2020 stood at Kshs 6.3 tn, with the country having raised the debt ceiling to the absolute figure of Kshs 9.0 tn from the initial 50% of GDP in October 2019, this means that the government has headroom to borrow an additional Kshs 2.7 tn before the current debt ceiling is exceeded. The debt mix stands at 51:49 external and domestic debt, respectively, meaning foreign borrowing is currently at Kshs 3.2 tn while domestic borrowing came in at Kshs 3.1 tn. Below is a table highlighting the trend in debt composition over the last 15 years; 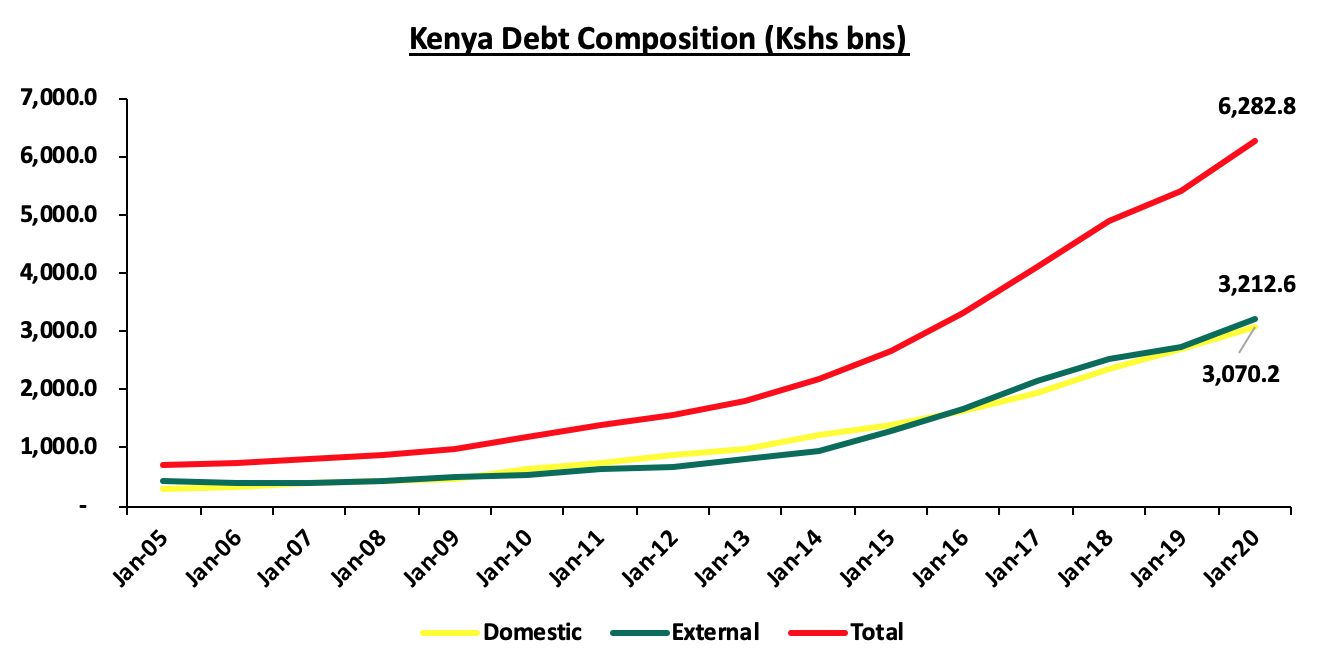 This is illustrated in the chart below:

This is a measure of how much of the government’s revenue is used to service debt. For the first half of 2020, revenue collection activities of the government have been affected due to the ongoing pandemic with major economic sectors such as tourism, manufacturing and agriculture feeling the brunt effects of the pandemic following supply-side shocks. According to the National Treasury, the debt to service revenue ratio is estimated at 45.2% at the end of 2019, higher than the recommended threshold of 30.0% and as such elevating the risks of repayment following shocks arising from the ongoing pandemic and low revenue collection. For this financial year, a total of Kshs 904.7 bn has been set aside for debt servicing from the Kshs 2.1 tn projected revenue collection. Below is a chart showing the debt service to revenue ratio;

Further to the above, we expect the country’s cost of debt servicing to rise driven by currency depreciation with the shilling having depreciated by 6.0% year to date to close the week at Kshs/USD107.5. Additionally, the debt service to revenue ratio is expected to increase mainly driven by the expected decline in revenue.

On the other hand, Kenya’s debt to GDP ratio came in at an estimated 62.1% in 2019, 12.1% above the IMF recommended threshold of 50.0%. Late last year, the treasury amended the Public Finance Management (PFM) regulations to substitute the debt ceiling which was previously set at 50.0% of GDP to an absolute figure of Kshs 9.0 tn to plug the budget shortfalls without hurting the economy since there was no more scope to raise taxes. According to Fitch Ratings, the shocks from COVID-19 are expected to delay the narrowing of the fiscal deficit. Government debt is forecasted to 70.0% of GDP in 2021 on the back of rising debt levels and weak revenue growth. Below is a graph highlighting the trend in the country’s debt to GDP ratio; 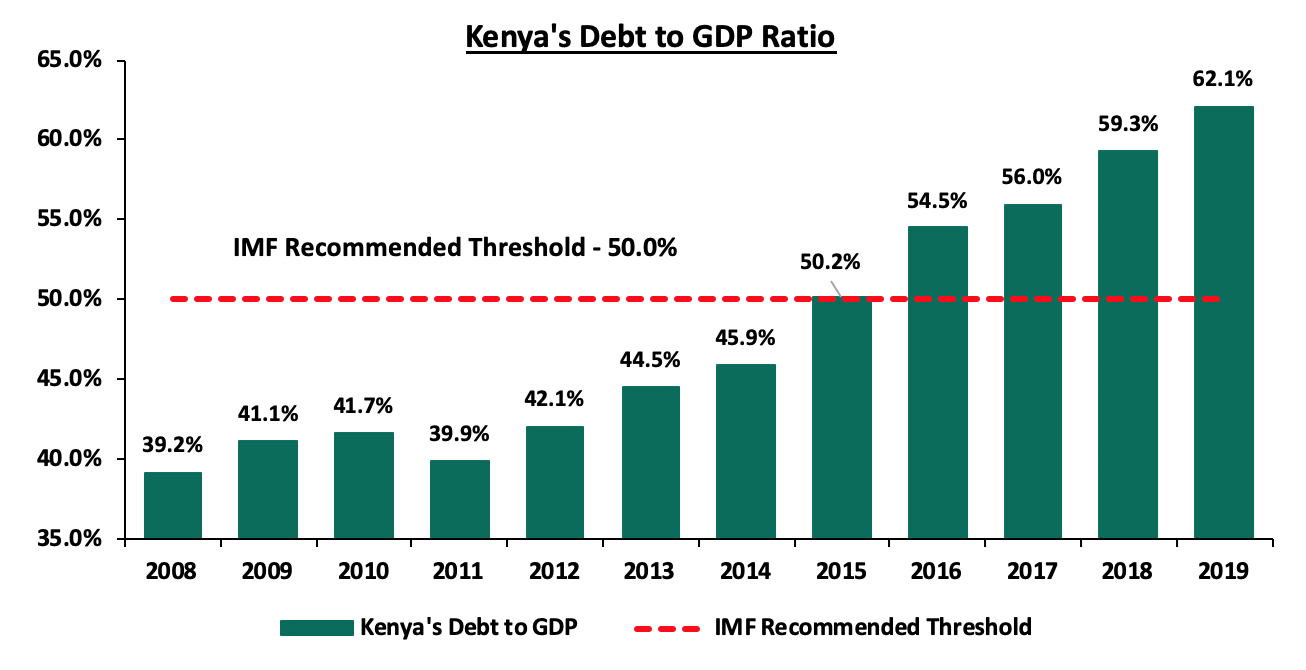 Some might argue that the additional debt is being directed towards development projects which will, in turn, lead to faster economic growth but this has not been the case. A significant amount of government spending has gone towards development projects whose expected economic return might not be able to finance the cost of financing. For example, the Exim Bank of China is set to receive Kshs 43.2 bn in debt payments for the SGR in the current fiscal year despite the project facing a variety of challenges such as low cargo volumes.

According to the IMF, the Kenyan economy is expected to grow at 1.0% in 2020, while the National Treasury expects the same to come in at 2.5%. The expected decline in growth is already being seen through the suppressed business activity experienced during the second quarter of the year, evidenced by the country’s Purchasing Manager’s Index which dipped to 34.8 in April 2020, the second-lowest level since the index was set up. The GDP growth for the year is expected to be slower than debt financing meaning the debt to GDP ratio will increase significantly since the denominator - GDP Growth - will grow at a much slower pace.

Below are some of the risks that the high debt levels open the economy to:

To determine whether the current debt is sustainable, we have put together a table of metrics indicating the level of concern based on the current and projected situation

Of the 5 metrics we have taken into account, 4 suggest High concern while 1 suggest Medium concern, as such we are of the opinion that the current debt levels are not sustainable and the government should be pro-active in alleviating the pressures on the country’s debt

The high debt levels in the country have become a point of concern with both the debt to GDP ratio as well as the debt service to revenue ratio having exceeded the recommended threshold. We expect the economy to face fiscal challenges arising from the global pandemic. This sentiment has been echoed by various authoritative bodies, pointing to a possible further downgrading of Kenya’s creditworthiness. Despite this, some investors are optimistic with regards to the country’ outlook evidenced by the decline in Eurobond yields over the month of May, pointing to the perception of lower risk in the country going forward coupled with the additional funding received from both the World Bank and the IMF. Locally, the Central Bank through the Monetary Policy Committee has continued to support the economy through the policy rate and the Cash Reserve Ratio and is confident that the measures put in place are having the desired effect. Similarly, the government has also made some tax amendments to help boost revenue collection and at the same time cushion the economy from the adverse effects of the coronavirus. Below are some actionable steps the government can take towards debt sustainability;

Disclaimer: The views expressed in this publication are those of the writers where particulars are not warranted. This publication is meant for general information only and is not a warranty, representation, advice, or solicitation of any nature. Readers are advised in all circumstances to seek the advice of a registered investment advisor.