In line with our regional expansion strategy, we continue to assess investment opportunities in the Kenyan Counties, to enable us to diversify our portfolio of real estate investments for our clients. So far, we have covered 13 Kenyan Counties, including; Nyeri, Laikipia, Meru, Mombasa, Narok, Homabay, Kisii and Uasin Gishu. In line with this, in August 2016 we released the Kisumu Real Estate Investment Opportunity 2016, a research note that focused on the real estate market performance in Kisumu covering the residential, commercial offices, retail and hospitality themes. According to the research note, the market recorded average rental yields of 7.0%, with office, retail, and residential themes recording average rental yields of 7.0%, 9.0%, and 5.1%, respectively. In this focus, we update that research note with data collected in May 2018. We will cover the performance in terms of rental yields, price appreciation, uptake and occupancy rates and compare with the performance in May 2016 to gauge trends, opportunities, outlook and hence investment opportunities in Kisumu.  We will start by giving a general overview of Kisumu City, and then cover the key drivers and challenges facing the real estate market, followed by an analysis of the performance of the various themes, before finally concluding by giving our outlook, and the real estate investment opportunity.

Kisumu City is the principal city of Western Kenya, situated approximately 341.6 km West of Kenya's capital city, Nairobi. It is the third largest city in Kenya after Nairobi and Mombasa. The City serves as the headquarters of Kisumu County, and it was formerly the central administrative headquarters of Nyanza Province. Kisumu has witnessed growth in infrastructure and amenities, with the development of roads such as the Nyamasaria - Magadi- Manyatta Road, Kisumu - Kisian Highway, and the upgrading of Kisumu International Airport to international status. In terms of real estate, Kisumu offers a unique blend of upper-mid to low-income residential units, commercial malls and office blocks, which mainly host county headquarters and serve the Kisumu urban population.

The main factors driving the real estate market in Kisumu are:

However, despite all the factors supporting the real estate sector in Kisumu, there are still a number of factors, which if not properly addressed will present challenges to real estate development in the county, and these include:

Our market research focused on:

The key themes covered are:

Generally, the residential sector in Kisumu is nascent with most of the mega developments such as Victoria Gardens in Riat Hills, Translakes Estate in Mamboleo, and Lake View Breeze in Milimani Estate coming up in the last 5-years. The increase in developments is attributable to government decentralization and urbanization. As at May 2018, the sector’s performance softened, with the sector recording a decline of 3.2% points in total returns from 10.1% in May 2016 to 6.9% in May 2018, attributable to political uncertainties in the area over the 2017 election.

In our residential sector analysis, we classified the various suburbs in Kisumu into two segments:

The performance of the residential theme in Kisumu is as summarized below:

Apartments recorded an average total return of 8.5%, with a rental yield of 5.5% and price appreciation of 3.0%. This is a 0.1% points increase in rental yield from 5.4% in May 2016, and a 1.3%points annualized decline in price appreciation from 5.6% in the same period, attributable to the political uncertainties over the 2017 election period.

The performance of the various market segments is as summarized below:

The high-end segment consists of prime suburbs in Kisumu, such as Milimani and its environs. The segment recorded a decline in performance, with the rate of growth of price appreciation declining by 1.8% points p.a. from 5.9% in May 2016 to 2.4% in May 2018, and rental yields declining by 0.1% points p.a. from 5.7% to 5.6% in the same period. The decline in performance is attributable to wait and see attitude by investors over the prolonged 2017 electioneering period, which reduced economic activity in the city.

The performance of high-end apartments is as summarized below;

Mid-end segment consists of estates such as Kibos, Kanyakwar, and Mamboleo, and are characterized by both high-rise and low-density houses mainly for the middle-class population of the city. This segment recorded an annual uptake of 23.4%, higher than the high-end segment at 16.1%, attributable to mid-end apartments’ affordability as they are 29.4% cheaper than the high-end segment, with a price per SQM of Kshs 99,994, against an average of Kshs 77,250 per SQM for mid-end apartments.

The performance of mid-end apartments in Kisumu is as summarized below:

The detached unit’s performance softened between May 2016 - May 2018, with the rate of growth of price appreciation declining by 2.4% points p.a. from 4.2% to (0.7%) and rental yields declining by 0.1% points p.a. from 4.5% to 4.4%. The decline in performance is attributable a tough operating environment, characterized by low credit supply, as a result of the implementation of the Banking (Amendment) Act 2015, which resulted in declining private sector credit growth from 25.8% in June 2014 to 1.7% as at September 2017. This led to some of the developments stalling, and a wait and see attitude by investors over the 2017 electioneering period.

The performance of detached units is as summarized below;

In terms of overall market performance, the residential sector recorded total returns of 6.9%, a 3.2% point (1.6% points annualized) decline from the 10.1% total returns recorded in May 2016. The performance is attributable to a decline in price appreciation, which dropped by 1.7% points y/y.

The residential sector performance is as summarized below;

Over the last 2-years, the performance of commercial offices in Kisumu has picked up, with average rental yields for Grade C offices in the sector increasing by 0.3% points p.a., from 7.0% in May 2016 to 7.6% in May 2018. The occupancy rates were also in an upward trend, increasing by 1.5% points from 90.6% in May 2016 to 93.3% in May 2018. The better performance is as a result of an increase in demand for office space in the city, driven by devolution and growth in SME’s. Generally, Kisumu City lacks good commercial buildings with most of the buildings being Grade C, however over the last year, the market welcomed Grade B buildings such as Mega Plaza and University of Nairobi building located along Oginga Odinga Rd.

The retail sector in Kisumu recorded 0.2% points annualized increase in rental yields from 9.0% in May 2016 to 9.4% in May 2018, attributable to 1.7% points increase in occupancy rates from 75.8% in May 2016 to 78.3% in May 2018. This was driven by the area’s high urbanisation rate averaging at 5.5% p.a. compared to Kenya’s average urbanisation rate of 4.4% attributable to devolution, which is the pull factor for growth in population in the area, and a key driver for the retail sector.

The land sector recorded an annualized capital appreciation of 8.9%, attributed to speculations and increased demand for land in residential zones such as Riat Hills as the residents shift to the outskirts of Kisumu City due to congestion in estates around Kisumu CBD

The Kisumu real estate sector recorded a total return of 16.1%, with a rental yield of 7.2% and a capital appreciation at 8.9% p.a.

The summary of the real estate sector performance is as below;

Comparison with other Counties in Kenya:

Below is a summary of the analysis; 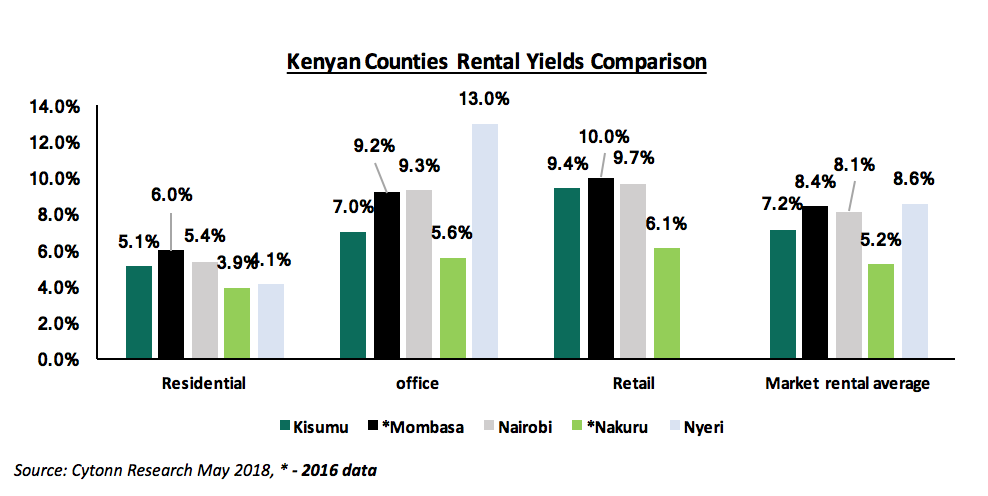 We have analyzed and identified the investment opportunity in Kisumu City, based on May 2016 and May 2018 performance as shown below;

Out of the four real estate themes under evaluation in Kisumu, 2 themes, that is commercial offices and land have a positive outlook, retail sector has a neutral outlook, while residential has a negative outlook, thus we retain a neutral outlook for the Kisumu real estate market. The market, however, has pockets of value in sectors such as Grade A and B commercial offices driven by devolution and growth in SMEs while the land sector is driven by demand from developers as they expand from the CBD to relatively new suburbs such as Riat Hills.

Disclaimer:The views expressed in this publication are those of the writers where particulars are not warranted. This publication, which is in compliance with Section 2 of the Capital Markets Authority Act Cap 485A, is meant for general information only and is not a warranty, representation, advice or solicitation of any nature. Readers are advised in all circumstances to seek the advice of a registered investment advisor.