Following the continued depreciation of the Kenya Shilling against the US Dollar and various sentiments being raised in the recent past with regards to currency manipulation, we decided to do a note to demystify the various currency regimes, the mechanisms under which they operate, and how countries use them to ensure currency stability. We shall also focus on the various techniques used to estimate the value of a currency and the factors that have been driving the downward performance of the Kenya shilling.

In our focus on Currency and Interest Rates, where we looked at the factors that were expected to affect the performance of the Kenyan shilling against the US Dollar. We expected the currency and the interest rates to remain under pressure with the currency depreciation to continue. This mainly because of the predicted reduction in export inflows as some of Kenya’s key trading partners had instituted lockdown measures, as well as, a decline in diaspora remittances;

In this focus we shall cover the following:

Section I: A Brief History of Currency Regimes

An exchange rate can be widely defined as the value of one currency for the purpose of conversion to another. An example, how many Kenyan shillings you would need to acquire one US Dollar. However, just like in the exchange of goods and services, we must take into account what determines that price. As such, the monetary authority of a country or currency union manages the currency in relation to other currencies and the foreign exchange market through exchange rate regimes which are the frameworks under which the price is determined.

Initially, most countries used the gold standard whose value was directly linked to gold and the money supply was tied to their trade balance; but in the 1930s, most countries abandoned it for the Bretton Woods model due to decline in global trading activities.  Under this model, the value of the US dollar was pegged on Gold and all the other currencies were pegged on the value of the US dollar.

An ideal currency regime would have three characteristics. First, all the currencies would be freely exchangeable for any purpose and any amount thus ensuring the free flow of capital. Second, the exchange rate between any two currencies would be fixed to eliminate currency-related uncertainties, especially for goods and services. Third, each country would be free to pursue independent monetary policy objectives.

Types of Currency Regimes across the World:

There are three broad exchange regimes used by various governments across the world, these three regimes as explained in depth in our understanding currency regimes note. This include:

It is difficult to maintain the three conditions for an ideal currency regime, therefore each country chooses the regime that suits their policy objectives.  Previously, there have been instances where a country has switched from one regime to another. Here is a look at examples of countries that have shifted their exchange regimes over the years;

Section II: How to Determine the Value of a Currency

One would then ask how you estimate the exchange rate between 2 countries and the value of the country’s currency. The most widely used methods are:

With countries trying to implement various exchange rates the question of finding the true value of a currency then comes in. Currency manipulation has been one of the most controversial economic issues in the limelight for the past years. Central banks across the world have been accused of managing the value of their currency during their routine interventions to counter monetary shocks. Currency manipulation is the artificial lowering of a country’s currency value that provides it with an unfair advantage of lowering the cost of their exports. The US produces a bi-annual report identifying countries that are classified as manipulators. In 2019, the US accused China of manipulation but later withdrew the claims. Currently, the IMF has developed guidelines on identification and control of currency manipulation. However, it faces challenges in implementation and is still looking at the best way to deal with manipulators.

Factors that affect the performance of the currency

Since independence, the Kenyan exchange rate has undergone various regime shifts, which have mainly been attributed to economic events. From independence to 1974, the rate was pegged to the dollar, which later shifted to a crawling peg after a series of devaluations, then it became fully liberalized in 1993. The current exchange rate regime is free-floating in nature and is determined by the market forces of demand and supply. However, the Central Bank of Kenya frequently participates in the foreign exchange market when; it needs to curtail volatility originating from external shocks, build stocks of foreign reserves, effect government payments and regulate liquidity in the market.

During a country review report released in 2018, the IMF suggested that the Kenyan exchange rate was overvalued by 17.5%. This was attributed partly to CBK engaging in periodic foreign exchange interventions, reflecting the limited movement of the shilling relative to the US dollar.  The Central Bank of Kenya (CBK) governor, Dr. Patrick Njoroge, however, refuted the claims in a media briefing, coming out to clarify that the Central Bank does interventions in the market which can be seen as manipulations but they were actions that fall within the purview of the bank. Recently, there were also suggestions that the US had cautioned the Kenyan government against currency manipulation, a fact that the Governor clarified that it is a clause the US government includes in all its trade negotiations.

At the start of 2020 the Kenyan Shilling was exchanging at Kshs 101.4 against the US Dollar but due to the effects of COVID-19 weighing down on the economy the shilling has since depreciated by 8.4% to close at Kshs 109.9 at 27th November 2020 as highlighted in the chart below: 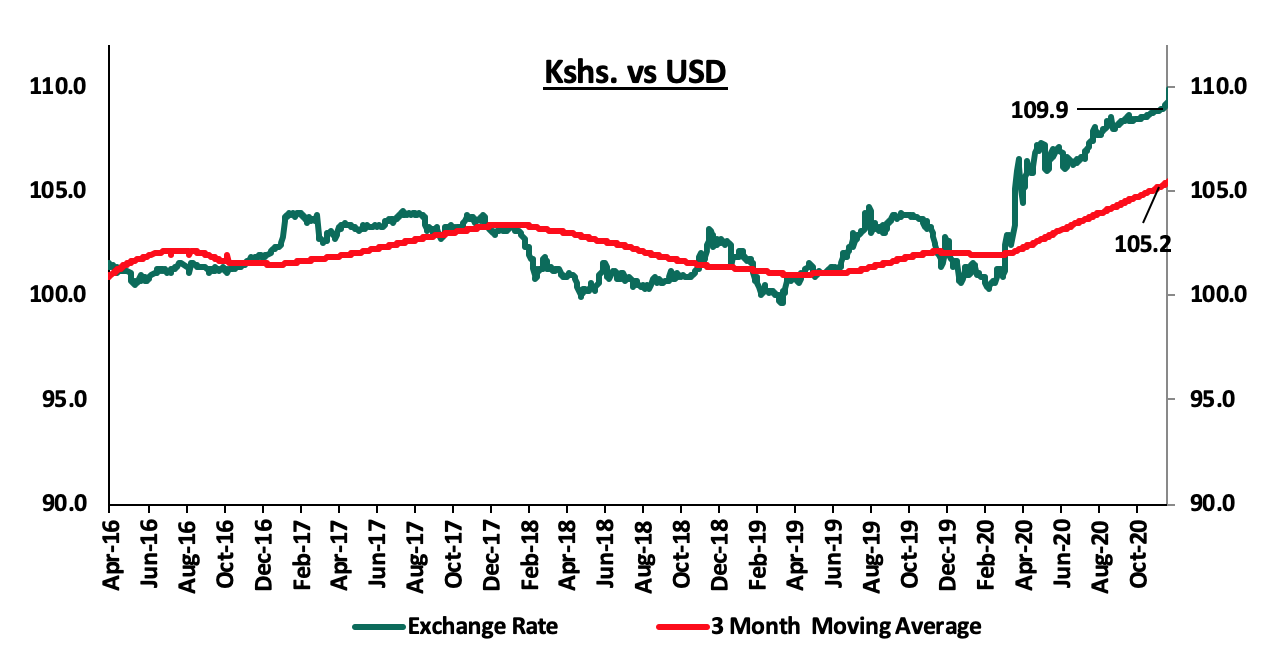 The recent performance of the shilling has been affected by:

Our in- house view is that the shilling will remain under pressure and we expect it to trade against the dollar at a range of Kshs 107.5- 109.5 in the short term. We expect the shilling to be cushioned from further shocks by:

Determining the “true value” of a currency can be challenging given the various models used and the fact that countries have diverse economic dynamics and challenges.

The continued depreciation of the Kenyan shilling is expected to have the following effects to the economy;

The figure below shows Kenya’s debt composition as of June 2020 with 55.2% of the total debt being foreign borrowing:

However, the government has also indicated on a possibility of joining the Debt Service Suspension Initiative (DSSI), aimed at allowing low-income countries to concentrate resources on fighting the pandemic. The ministry has also indicated that joining the initiative could save the country around Kshs 70-75 bn in interest payments.

2. Making imports more expensive: Kenya is a Net importer meaning that Kenya  Imports more than it exports goods and services, therefore further depreciation will make the imports more expensive and  with the current account deficit  improving in will see the importers spend more to bring commodities into the country. The adjustment in Kenya’s price levels relative to those of its trading partners is however expected to be positive in helping the economy adjust to the COVID-19 shock and stage a recovery, by increasing the international competitiveness of goods and services produced in Kenya.

Disclaimer: The views expressed in this publication are those of the writers where particulars are not warranted. This publication, which is in compliance with Section 2 of the Capital Markets Authority Act Cap 485A, is meant for general information only and is not a warranty, representation, advice or solicitation of any nature. Readers are advised in all circumstances to seek the advice of a registered investment advisor.